CBRS AND ITS ENDLESS OPPORTUNITIES

CBRS AND ITS ENDLESS OPPORTUNITIES

Citizens Broadband Radio Service (CBRS) is a 150 MHz wide broadcast band of the 3.5 GHz band (3550 MHz to 3700 MHz) in the United States.
The Federal Communications Commission has allocated a region of the radio-frequency spectrum ranging from 3.5GHz to 3.7GHz for sharing among three categories of users: incumbent users, priority licensees, and generally permitted, which is sparsely licensed. FCC first acted on the CBRS band in 2012, although the band has gained traction in recent years. For cellular and cable providers, as well as other new entrants, this band is an ideal complement to their mid-band 5G spectrum inventory.
CBRS spectrum has traditionally been reserved primarily for the Department of Defense, which utilizes it for US Navy radar activities, including ship-borne radar that operates mostly offshore. The Navy will continue to enjoy priority access to the band as an existing licensee. While the Navy will be safeguarded from interference, the FCC has permitted the sharing of unused spectrum in the band.
The CBRS band's licensing is a neither exclusive nor fully unlicensed spectrum.
Instead, the FCC took a hybrid approach to the spectrum, combining licensed and unlicensed elements in a new sharing system.
CBRS is allowing businesses to construct their own private 4G/5G networks, which is resulting in enhanced 4G/5G offerings from service providers. While the Citizens Broadband Radio Service (CBRS) spectrum will aid U.S. cellular carriers in better managing traffic on their networks, it will also open the door to plenty of new entrants as neutral-host providers, cable and internet providers, and businesses seek to manage their own wireless devices and traffic.

The incumbent government and satellite users, as well as broadband wireless subscribers (until late 2020), make up Tier 1.

Tier 2 Priority Access Licenses (PAL)will have access to 70 megahertz of the total 150 megahertz available through a competitive bidding process.

Users with General Authorized Access (GAA) will have opportunistic access to 80 megahertz of spectrum in every market, as well as the 70 megahertz of PAL spectrum when it is not in use by PAL licensees. In other words, GAA users are given free cellular spectrum provided they can make excellent use of it. FCC is allowing some bidders that qualify as small enterprises or rural carriers to use bidding credits 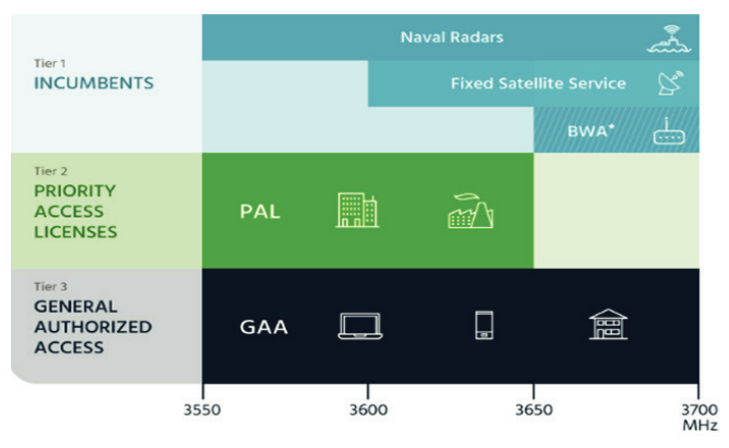 A Spectrum Access System (SAS) is used to manage and assign spectrum across these three tiers of access on a dynamic, as-needed basis. SAS will guarantee that every CBRS radio, also known as a CBSD, transmitting in this band follows FCC Part 96 spectrum sharing guidelines. The SAS will be connected to a network of sensors called Environmental Sensing Capability to defend against interference with Navy radar (ESC). The ESC network will keep an eye out for Navy radar activity and notify the SAS if it discovers anything. The SAS will coordinate the CBSD transmission levels and channels in such an occurrence to guarantee that no adverse interference occurs. 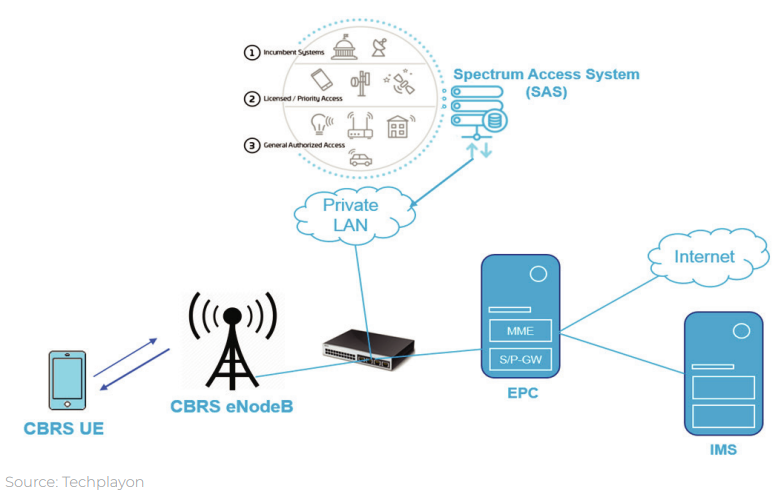 The majority of mobile applications accessible on cellular devices today are effective because they employ LTE &5G technology, which, among other things, provides far quicker speeds than prior generations of cellular technology. Because CBRS spectrum will also utilize LTE technology/5G, it will be able to provide genuine mobility, as well as greater security and service quality than unlicensed Wi-Fi networks.
It's quite simple to get into Wi-Fi gateways, but CBRS adds further levels of protection.
CBRS use cases come from a diverse range of industries, including:

CBRS is going to play a significant role across numerous industry sectors, not only the mobile sector, which is a notable characteristic of its possible use cases. CBRS is expected to be an important spectrum platform for DAS operators, fixed wireless internet service providers (WISPs), and cable operators, according to experts. While many anticipate mobile operators using CBRS to increase small cell capacity for mobile LTE, other service providers, such as cable and WISPs, are expected to leverage CBRS to improve last-mile and access solutions, frequently via fixed wireless infrastructure. 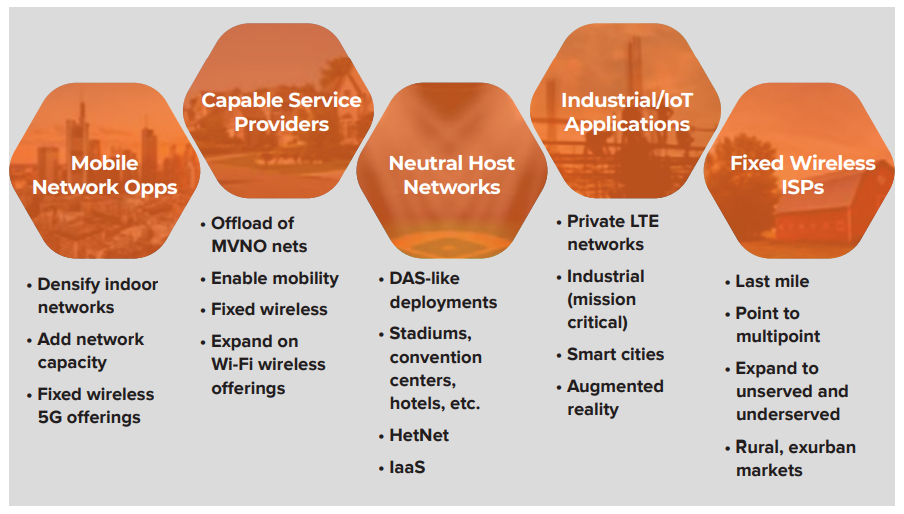 CBRS spectrum will give rise to new network providers, spectrum sharing systems, and a new ecosystem of devices. While mobile providers are expected to be the first to market with offloading capabilities, the industry will see a slew of new entrants.
Smaller businesses will be able to purchase infrastructure as a service from neutral-host providers. Larger businesses will be able to build their own private LTE networks, which will allow them to realize operational benefits.
As the market evolves network deployments will motivate early adopters to innovate new methods to connect, whether through data or voice, that were not anticipated at the start of the industry. 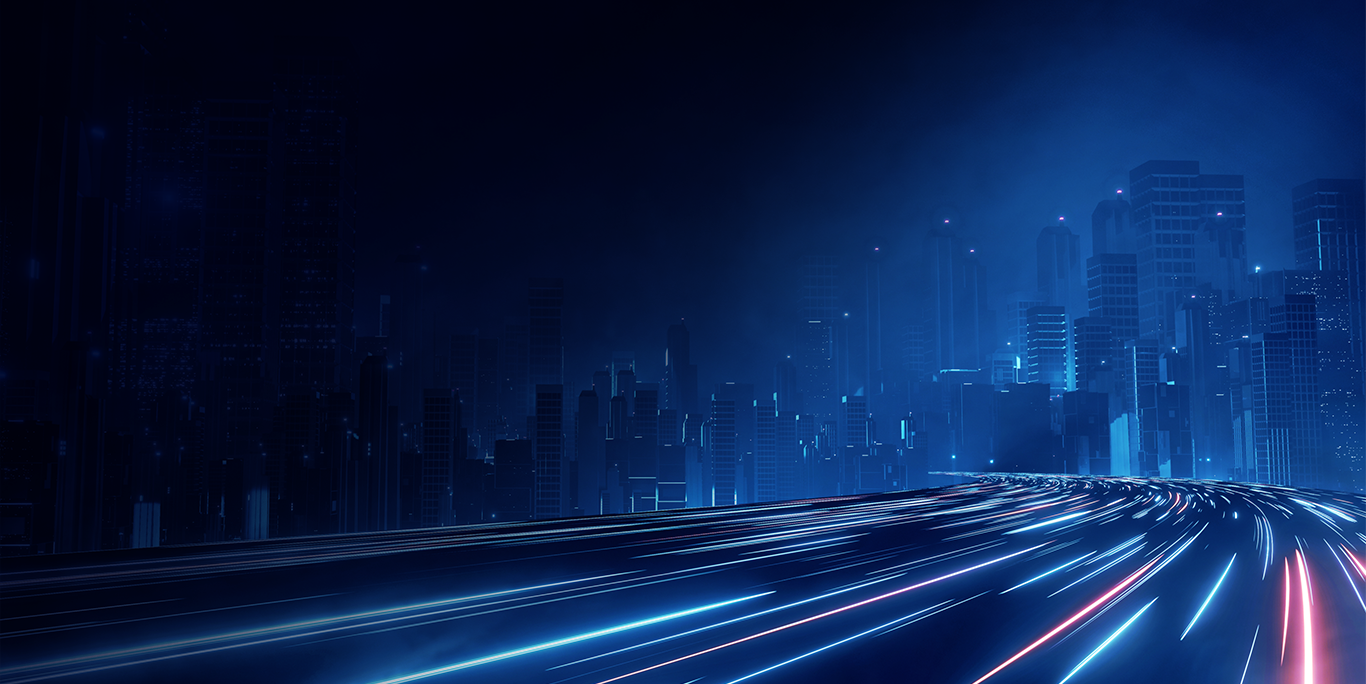 To reduce your time to a network launch, we leverage our extensive and vendor-agnostic wireless network knowledge, our subject matter expertise, our in-house automation, and our analytics platform capabilities. 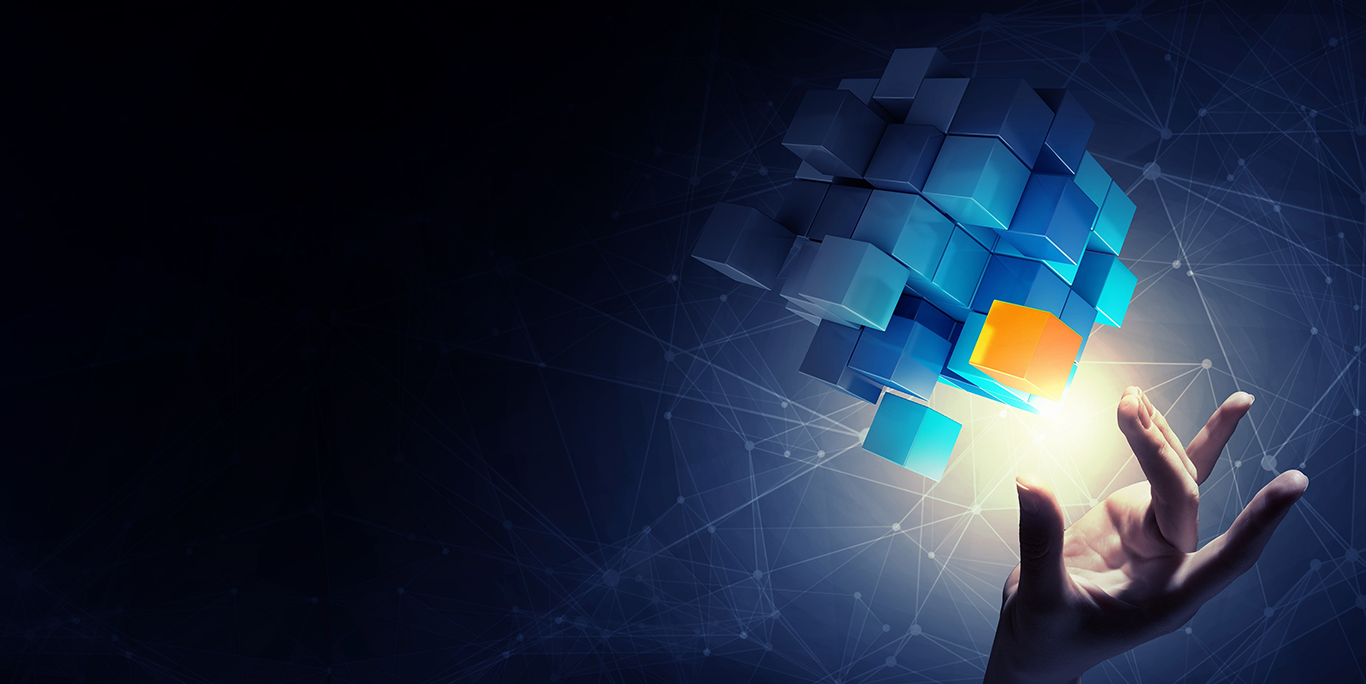 To provide an end-to-end automated approach to site lifecycle management and network performance monitoring, our services are organized around ML-based automation and analytics. 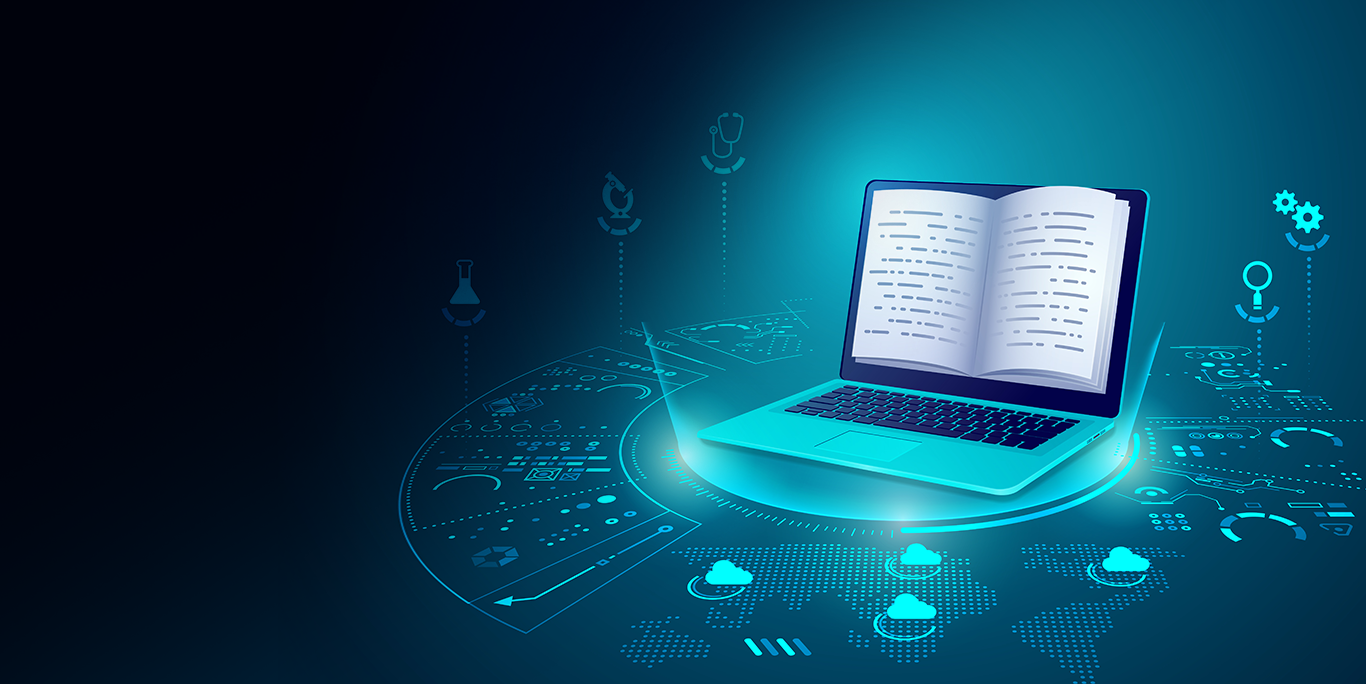 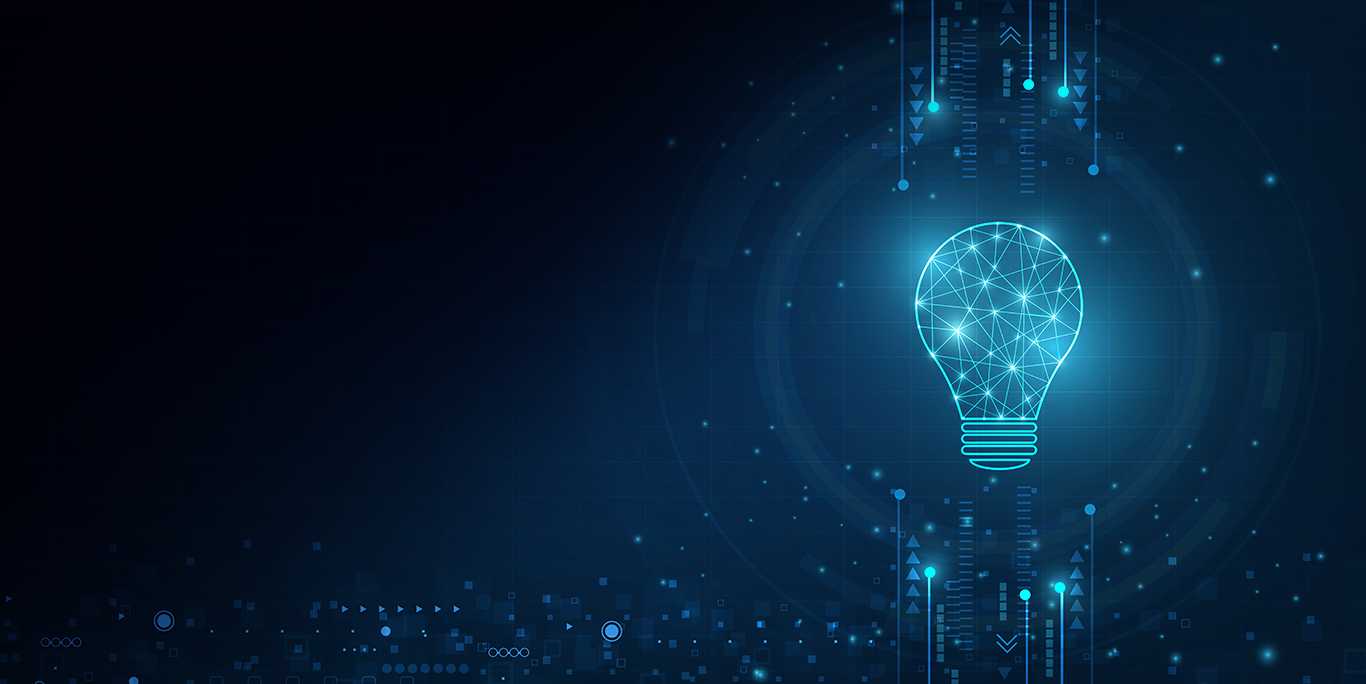 To offer you the most technologically advanced 5G network deployment services, we have built a global center of excellence for emerging wireless innovations.